England Tribe is set to be a bit quieter than usual this season, but for good reason.

I have been fortunate to take a writing position with Bat Flips and Nerds this year, the leading British baseball website. I will be writing and reporting about the Cleveland Indians every week, exclusively for them.

You can find my first piece in the link below, an introduction to the 2020 Tribe:

I have written a few pieces for BF&N in the past but this is the first time I'll be writing full time for them, and I'm really excited about this opportunity.

Join me on this journey, and you can follow all my Indians writing in 2020 by clicking the link below:

https://batflipsandnerds.com/author/ashday/
Posted by Ash at 12:00 PM No comments:

Spring training is almost upon us and with it comes speculation. For the Cleveland Indians, they appear settled with what they have, as dull as that may be. However, there's a handful of position battles to monitor once pitchers and catchers report again, providing us with some meaningful talking points.

With Corey Kluber now with the Rangers, the Indians will rely on Mike Clevinger, Shane Bieber and a healthy Carlos Carrasco to front the rotation. Which leaves two open spots, likely to be contested by Zach Plesac, Aaron Civale and Adam Plutko. 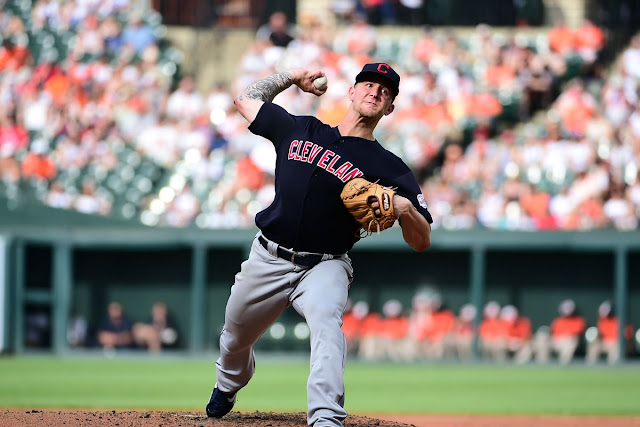 Plesac started 21 games for the Tribe in 2019 and impressed in his rookie season. The 2016 draft pick recorded a 3.81 ERA over 115.2 innings and was a mainstay for Cleveland down the stretch. Considering the 6'3 right hander wasn't expected to feature for the Indians last year, he did remarkably well. The highlight of his year came in mid-September when he dominated the Angels in a four-hit, complete game shutout. Plesac was the first Indians rookie to throw a shutout since 2006 (recorded by the infamous Jeremy Sowers of all people).

Plesac's 4.94 FIP was a cause for concern though, and he recorded a below average 6.85 K/9 too. His propensity for walks was also a little worrying, his 3.11 BB/9 and 8.4% walk rate both above league average. Despite that, Plesac showed enough potential to be considered a rotation favorite ahead of 2020 and he'll be given the spring to cement his place, but he's far from a sure thing to keep his spot. 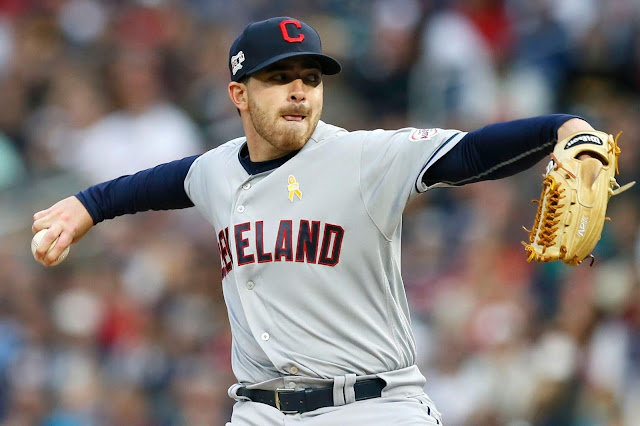 Civale also impressed as a rookie, joining Plesac in the rotation to make 10 superb starts over August and September (with a cameo in June too). The 24-year-old finished 2019 with a 2.34 ERA and 3.40 FIP, for an astounding 202 ERA+. Civale loved pitching against the lowly Tigers in particular, excelling in each of his three starts with a 1.31 ERA and an Indians victory each time.

Given the small sample size, questions about Civale sustaining this level will linger until the season gets underway and like Plesac, Civale isn't guaranteed his position either. However, his resumé of work at the big league level so far has been overwhelmingly positive and he's favored to retain his place, provided he avoids disaster in the spring. 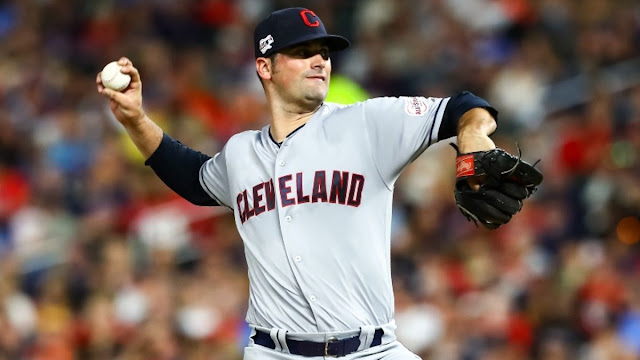 Plutko is the final contender and is out of minor league options. He has to make it stick or he could be headed out of Cleveland for good. The 28-year-old Californian pitched 109.1 innings over 21 appearances in 2019, and recorded a 4.86 ERA. Plutko's overall numbers are typical for a number five guy and he was often solid when called upon. His 5.23 FIP and 97 ERA+ are unremarkable but Plutko was an important contributor when the Indians needed him most: his maturity, ability to eat innings, and overall reliability were invaluable when the Tribe lost Kluber, Clevinger and Carrasco to injuries.

Among his fellow contenders, Plutko is the more experienced pitcher, throwing more MLB innings than both Plesac and Civale combined. Of course, those innings by Plutko were ultimately less spectacular and effective than those thrown by his younger teammates, which may give them the advantage. The veteran certainly feels like the outsider looking in but an impressive spring could be enough to secure his place in the rotation. As the underdog, you can't help but root for him.

The fringe challengers invited to spring training consist of Logan Allen, Triston McKenzie, Scott Moss and Jefry Rodriguez. Nobody from this group is expected to seriously upset the established order, and would only be in the running if injury struck. Perhaps Rodriguez could feature for spot starts or a relief role, but the others may benefit from more seasoning in the upper minor leagues.

With spring training on the horizon, it will be interesting to see how it all plays out, and who management will opt for. 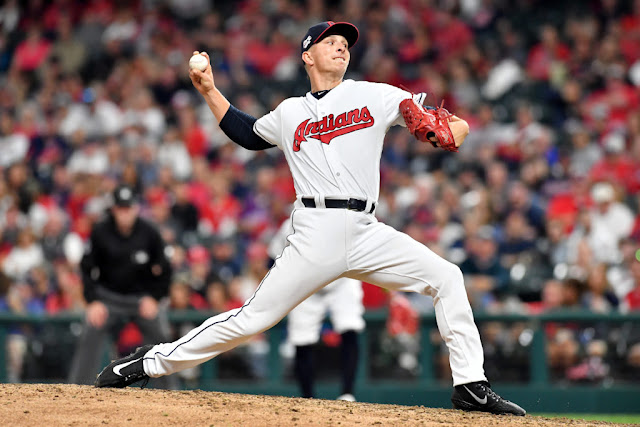 It's been another quiet winter for fans of the Cleveland Indians. With very little roster activity to discuss, the recent focus has been on ownership and their unwillingness to invest in the club. With regards to the players, the majority of discussion this offseason has revolved around who's leaving the city, not who's coming in.

It's fair to say that optimism has been hard to find at the corner of Carnegie and Ontario this fall.

With that said, and baseball season nearing ever closer, it's led me to start looking at the Indians roster and who is on the team to get excited about.

The young pitcher with the arm of pure fire had an impressive 2019 season and really caught the eye in his brief cameo with the Indians last September. Who knew that 100mph bullets out of the bullpen really turns heads?

Drafted by Cleveland in the 9th round of the 2017 draft, Karinchak has risen through the minors at an incredible pace, especially since converting into a reliever in 2018. Last season he split the majority of his time between Double-A Akron and Triple-A Columbus and struck out nearly every person he encountered. Between the two levels, Karinchak combined to record 66 strikeouts over 27.1 innings.

He hasn't looked back. All evidence points to his time in the minor leagues being over: what does he have left to prove there? Karinchak's penchant for strikeouts makes for exhilarating viewing, and the Tribe will be expecting him to feature prominently out of the bullpen in 2020.

Karinchak will enter spring training with serious ambitions of breaking camp with the team. In fact, it should be an expectation. Fans are already looking forward to the prospect of him teaming up with fellow flamethrower Emmanuel Clase, forming a potentially dominant partnership in high leverage situations for years to come.

The 6'3 right-handed hurler is definitely one to watch in the coming months and beyond.

Why can't it be the spring already?
Posted by Ash at 1:05 PM No comments:

Your New Favourite Aspect of the Offseason 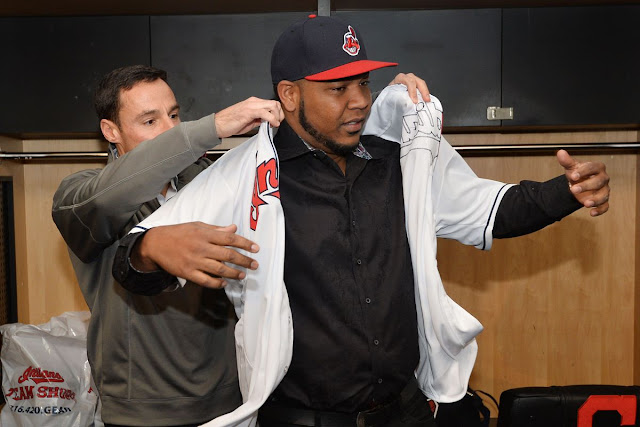 With the MLB offseason finally heating up and players beginning to move, I thought I would share a piece I recently wrote for Bat Flips & Nerds. It's about a particular quirk in the sport I enjoy; the ritual of unveiling your team's latest signing to the baseball world, a bit of fun.

https://batflipsandnerds.com/2019/11/11/your-new-favourite-aspect-of-the-offseason/
Posted by Ash at 2:03 PM No comments:

Thank you for finding England Tribe, a blog about the Cleveland Indians from an Englishman's perspective.
I started this blog in the spring of 2013 and, although I can't commit to writing on here every day, I'll try my best to produce some interesting content about the Tribe.